What is the genetically modified breeding?

Transgenic technology is the introduction of artificially isolated and modified genes into the organism's genome. The expression of the introduced genes causes the heritable modification of the organism's traits. This technology is called transgenic technology. According to the traditional method, the selection and breeding of species is carried out through random gene mutations. This process is often long, random and uncertain. But through transgenic technology, biological recombination can be realized to increase the new traits people expect in a short time, and new varieties can be cultivated. The greatest significance of this technology is to carry out the horizontal transfer of genes and making it possible to exchange genes across species. The transformation of species through genetic modification is more purposeful and direct. Although there are some controversies about transgenic breeding technology, its advantages over traditional breeding are undeniable. Transgenic can greatly shorten the time and reduce the cost, and it has good application prospects in all aspects of life. 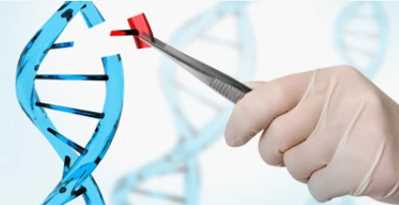 What are the applications of htDNA-chip® in genetically modified breeding?

Silicon-based high-throughput htDNA-chip® technology platforms play a significant role in promoting the cultivation of genetically modified breeding. First of all, htDNA-chip® can prepare thousands of nucleotide chains in a single run. Based on it, you can construct the target gene screening library. Libraries are a series of existing libraries and special customized libraries can also be constructed. htDNA-chip® ensures high efficiency and high precision in the construction process. After screening the target gene, the platform can perform high-throughput amplification. Finally, the next-generation sequencing technology verifies the successful introduction of the target gene. htDNA-chip® has greatly promoted the breeding process of genetically modified species, including transgenic plants, transgenic animals, transgenic bacterias.

Transgenic plants breeding is mainly used in agricultural production. Through our high-throughput htDNA-chip® technology platform, we can mainly achieve rapid screening of target genes and high-throughput next-generation sequencing to identify whether the transgenic plants are successful. Identifying the unsuccessful parts during the nursery period can greatly reduce costs and save time.

Transgenic animals breeding is widely used, mainly including the animal production and medical treatment. Based on htDNA-chip® technology platform, high-throughput screening of target genes in the early stage and identification of next-generation genes in the later stage can be achieved. htDNA-chip® technology platform can promote the process of genetic animals breeding.

Genetic bacterias which have a series of natural advantages in genetically modified field are mainly used in agriculture, mass production of protein drugs, food production, and environmental protection. htDNA-chip® technology platform can provide high-efficiency assistance in the screening and result identification of target genes which can greatly promote the cultivation process of genetic bacterias.

Advantages of htDNA-chip® in Biological Research

All services are available on a 24/7/365 basis. If you are interested in CD BioSciences' htDNA-chip® platform, please contact us.

For research use only. Not intended for any clinical use.